DEX – Why the decentralized exchange is so interesting 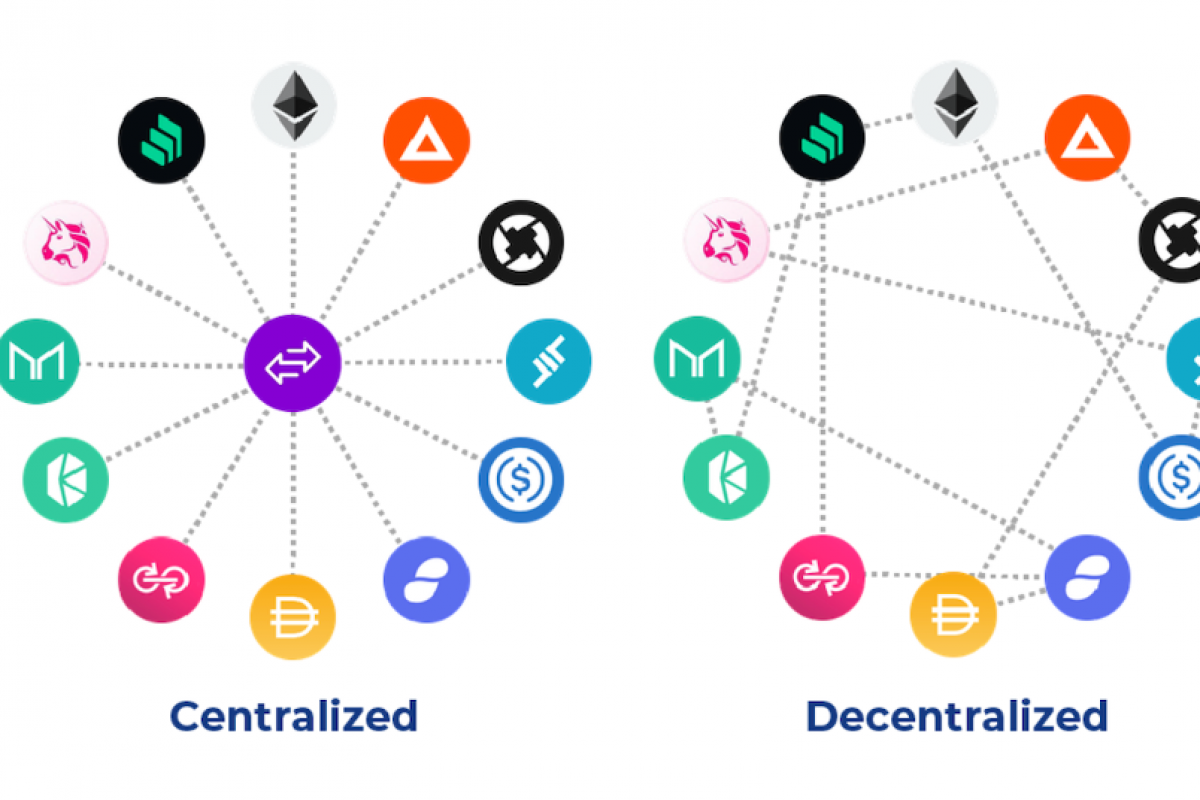 Cryptocurrencies like Bitcoin were developed as peer-to-peer payment systems. They were meant to allow users to transfer value without relying on a central authority or intermediary. The distributed network and often anonymous miners provide transaction processing and security.

The main goal of cryptocurrencies was to give users back control over their money. Nevertheless, decentralization has not reached all areas related to cryptocurrencies. Users have had to turn to Exchanges to trade or purchase cryptocurrencies. However, these exchanges are mostly centralized.

Among the largest were the attack on Coincheck in January 2018, in which US$533 million was stolen, and the attack on Mt. Gox, with over US$460 million stolen in February 2014.

Despite the significant security risks, users were left with little choice but to trade their crypto assets on centralized exchanges. Many services and everyday items cannot yet be bought with cryptocurrencies.

On the other hand, traders must first use fiat currencies to be able to buy cryptocurrencies. How can trading on exchanges be made more secure? The solution could be decentralized exchanges or DEXs for short.

What is decentralized exchanges (DEX)?

The decentralized exchange is a type of marketplace that does not rely on a third-party provider to hold customers’ funds. Trading takes place in the form of transactions directly between customers via a peer-to-peer network.

This system contrasts with the centralized model where users deposit their funds and the exchange issues an ‘IOU’ that can be freely traded on the platform. When a user asks to withdraw their funds, they are converted into the cryptocurrency they represent and sent to their owner.

A basic distinction is made between two currency models:

A lot has happened since then, with many new decentralized exchanges emerging. Here are the most successful three DEXs:

0x stands for Over the Counter (OTC) and describes the trading of tokens directly and without fees with other investors. Each investor can generate his order himself, place it on the blockchain and sign it cryptographically.

Only the order is placed on the blockchain; the price negotiation between buyer and seller can take place via the usual communication channels.

Cryptocurrencies can be exchanged on the decentralized exchange 0x via peer-to-peer. The DEX is based on the Ethereum project and the associated coin is the 0x of the same name with the abbreviation ZRX.

The ZRX token from Ox

ZRX is a classic example of an ERC-20 token and enables the exchange of Ethereum-based assets. Other exchanges can access the 0x platform via an interface and integrate the services into their own services.

The token has three main functions:

0x is also able to use ERC-721 tokens and uses an open-source infrastructure. In addition, 0x is just a protocol, trades can be easily and quickly done with a Chrome Extension like Metamask.

Trades are conducted via smart contracts, which users can freely use via decentralized apps. Famous backers of DEX 0x include Polychain Capital, Pantera Capital, Jen Advisors from China and FBG Capital.

Around 24 million US dollars were raised in the first ICO. Owners of the tokens receive the ZRX token for providing their liquidity; it is also linked to governance rights at the same time.

0x has emerged mainly due to the need for existing high fees of central exchanges. However, another reason for the emergence is the fact that ERC-20 tokens cannot be exchanged with every token on all exchanges. Moreover, many new tokens are only tradable on major crypto exchanges months after their launch. Consequently, there are idle periods to bridge.

There are currently almost 300,000 individual traders registered on 0x. So far, the platform has handled over 1.5 million trades with a volume of more than 27 billion US dollars.

In the meantime, the Binance Smart Chain is also connected via API and at the end of May, Polygon was selected for further cooperation after a survey among users.

The 0x protocol is a middleware protocol that sits between the blockchain consensus layer and the user layer. Polygon now processes three times as many transactions as Ethereum.

The decentralized trading platform based on the Ethereum blockchain is designed for swapping token pairs. Current liquidity is around $4.5 billion and over 72,000 users have provided their assets as liquidity to the network.

Uniswap does not use native tokens and all fees go to the liquidity providers. This is currently up to a 0.5% transaction fee per trade. The Uniswap Coin UNI is limited to 1 billion units and is a pure governance token.

Users can deposit using PayPal, Skrill, Neteller or a credit card and then have the immediate ability to invest in UNI. The open-source infrastructure around Uniswap gets fantastic price forecasts from crypto experts because the protocol is user-friendly, cheap and low-risk.

The success proves the developers right because the Uniswap chart shows the course of the last months and there it is going steeply upwards.

Uniswap’s trading prices are set by an algorithm that also prevents imbalances from arising and inflation from taking hold. Via collective pools, liquidity providers have the option of contributing their deposited assets as liquidity to the network.

Arbitrage trading is popular with users, trading between platforms for as much profit as possible. Uniswap provides analysis tools and token lists for this purpose. As a decentralized aggregator, Uniswap thus also offers liquidity for many DEX aggregator platforms.

In the future, Uniswap’s main goal is to speed up payments and reduce transaction costs. To this end, the company also wants to achieve lower latency times.

A new era of decentralized exchange is coming in February 2022: Venice Swap