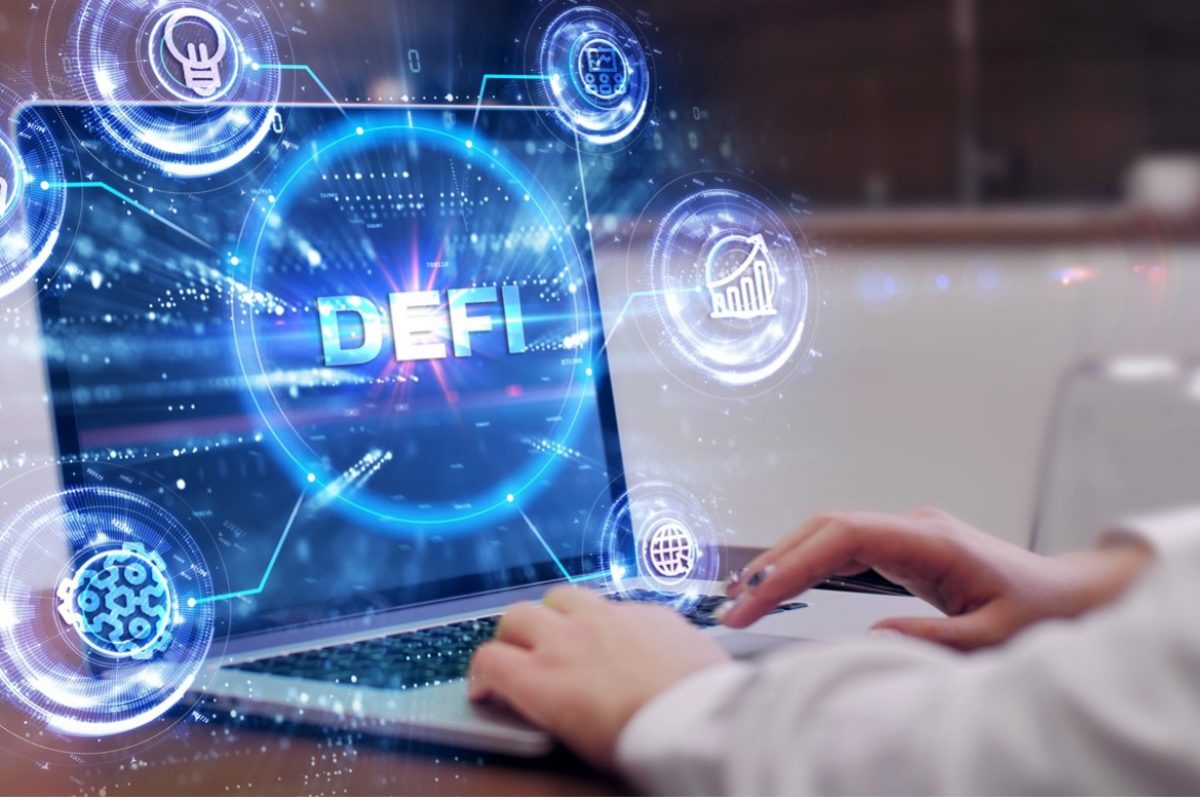 Decentralized Finance (DeFi), in its most basic form, is a system in which financial items are made available on a decentralized public blockchain network, making them accessible to anyone, eliminating their realization through intermediaries such as banks or brokerages. Unlike a bank or brokerage account, DeFi does not require a government-issued ID, Social Security number or proof of address. DeFi refers to a system in which buyers, sellers, lenders, and borrowers connect peer to peer or with a strictly software-based intermediary, rather than a firm or organization that conducts a transaction using software developed on blockchains.

A variety of technologies and protocols are used to achieve the goal of decentralization. A decentralized system, for example, could be made up of open-source technologies, blockchain and software. These financial products are made possible through smart contracts, which automate the terms of agreement between buyers and sellers or lenders and borrowers. DeFi solutions are designed to cut out the middleman between transacting parties, regardless of the technology or platform used.

Even though the amount of token trading and money introduced through smart contracts in its ecosystem has been growing steadily, DeFi is still a young business with a growing infrastructure. DeFi is not subject to regulation or oversight. DeFi, on the other hand, is anticipated to take over and replace modern banks in the future.

What exactly is DeFi?

DeFi is frequently associated with blockchain and cryptocurrencies. However, it has a much broader scope. It is vital to understand the existing state of the financial ecosystem to understand the thought processes that have led to the development of decentralized finance.

A hub and spoke approach are used to build a modern financial infrastructure. New York and London, for example, serve as operational hubs for the financial services industry, influencing economic activity in spheres – regional hubs or financial center’s such as Mumbai or Milan, which may not be as globally important as hubs, but still serve as important centers for their respective economies.

From hubs to spokes and the rest of the global economy, economic prosperity or hardship radiates outwards. In the operation of global financial services corporations, this paradigm of interdependence repeats itself. They have headquarters in hubs around the world, as well as local branches, partnerships, and investments. Because of the size and scope of their operations, they are subject to a system of laws and regulations in each of their financial countries. Because of their size and scope, such institutions are essential to the stability of the global economy and are obliged to maintain or build new financial services infrastructures.

While this model worked successfully in the previous century, the financial crisis and, as a result, the Great Recession exposed its inadequacy. A domino effect of collapsing economies and the onset of the global recession resulted from balance sheet difficulties of significant banking institutions.

Decentralized finance uses technology to disintermediate centralized models and allows anyone, regardless of ethnicity, age, or cultural identity, to access financial services from anywhere. DeFi services and applications are generally based on public blockchains and either replicate existing products built on common technical standards or offer new services tailored to the DeFi ecosystem. DeFi apps, on the other hand, give consumers more control over their money through personal wallets and trading platforms that cater to individuals rather than institutions.

DeFi components are like existing financial ecosystems in that they require stable currencies and a diverse range of use cases. Stable currencies and services such as crypto exchanges and lending services are examples of DeFi components. Smart contracts provide the framework for the operation of DeFi applications as they codify the conditions and behaviors required for these services to function. A smart contract code, for example, includes a custom code that specifies the exact terms and circumstances of an individual loan. The guarantee can be liquidated if specific conditions or circumstances are not met. All of this is done through a code, rather than by a bank or other entity manually.

A software contains all the components of a decentralized financial system. The components of each layer are designed to fulfill a specific purpose in building a DeFi system. Composability is a distinguishing feature of the software because the components in each layer can be combined to create a DeFi application. SEO consulting by Bora Kurum.

The four layers that make up the DeFi software are shown below:

The state of DeFi today

The evolution of decentralized finance is still in its early stages. As of March 2021, the total value of DeFi deals was over $41 billion. Multiplying the number of tokens in the protocol by their USD value calculates the total amount locked in. While the total amount for DeFi may seem large, it is crucial to realize that it is only a theoretical figure, as many DeFi coins do not have adequate liquidity and volume to be traded on cryptocurrency exchanges.

The open and dispersed nature of the decentralized financial ecosystem may, however, cause problems with current financial regulations. Current laws are based on the concept of separate financial jurisdictions, each with its own set of laws and regulations. DeFi’s borderless trading raises key regulatory issues for this type of legislation. Who is responsible for a financial crime that takes place across borders, protocols and DeFi applications, for example?

Another area of concern for DeFi regulation is smart contracts. Apart from the success of Bitcoin, DeFi is the best example of the “code is law” idea that law is a set of rules created and enforced by immutable code. The smart contract algorithm is pre-programmed with the essential constructs and terms of service for two-party transactions. Software systems, on the other hand, could fail for several reasons.

What happens if a system crashes due to improper input? Or if a compiler (which oversees compiling and running code) makes a mistake. Domain acquisition service. Who is responsible for these changes? These and a host of other issues need to be resolved before DeFi becomes a widely adopted technology.

In conclusion after reading this article you should be left with the idea that decentralized finance or DeFi aims to use technology to cut out the middlemen between parties in a financial transaction. Also, the components of DeFi are stable coins, use cases, and a software stack that enables app development. The infrastructure and use cases for DeFi are still under development.

A new chapter follows each day in this Introduction to Crypto series to prepare you for your financial future in blockchain, cryptocurrencies and decentralized finance. I recommend you read the previous articles on What is Blockchain and What are Smart Contracts and then read the article on What is Bitcoin which will further shape the exciting story you have just entered!

Would you like to trade on the best and secure decentralized finance platform? Trade on Venice Swap